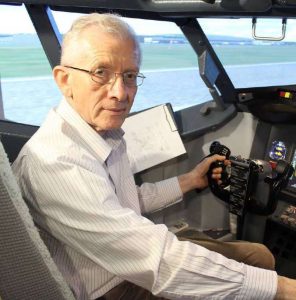 I am an  aeronautical engineer with over 15 years experience flying commercial airliners with an additional 18 years of lecturing in aviation quality and safety related matters. I am the manager of Aircraft Simulation in Mandurah, Western Australia.

We have our own B737-800NG demonstration flight simulator where the public can book a test flight before purchasing any of our products. We make,  assemble and sell B737-800 and Cessna 172 simulators using replica parts or OEM, the real aircraft parts for the best possible realism..

We even build our own parts that are genuine looking replicas of the real B737 parts, but at a much lower cost.

Wayne has extensive staff and command training as well as human resources management experience from a 24 year career with the Royal Australian Air Force.  He commanded RAAF Base Marlborough during Exercise Kangaroo 1981 as Officer Commanding, and RAAF Support Unit Hobart 1981-82, during which he was appointed Aide de Camp (ADC) to the Governor General of Australia and  then No 38 SQN RAAF (DHC-4 Caribou STOL Tactical Transport) 1983-85 as Commanding Officer. He retired in the rank of Wing Commander in the Royal Australian Air Force.

Qualifying as a military flying instructor December, 1969, Wayne has 17 years experience as a trainer, examiner and training manager amassing over 4,500 hours as an active military and civilian flying instructor. He was awarded arguably the world’s most prestigious qualification for Flying Instructional competence and excellence, the Royal Air Force A1 QFI Category, in 1974.